Mixed Feelings About The Spyderco Shaman 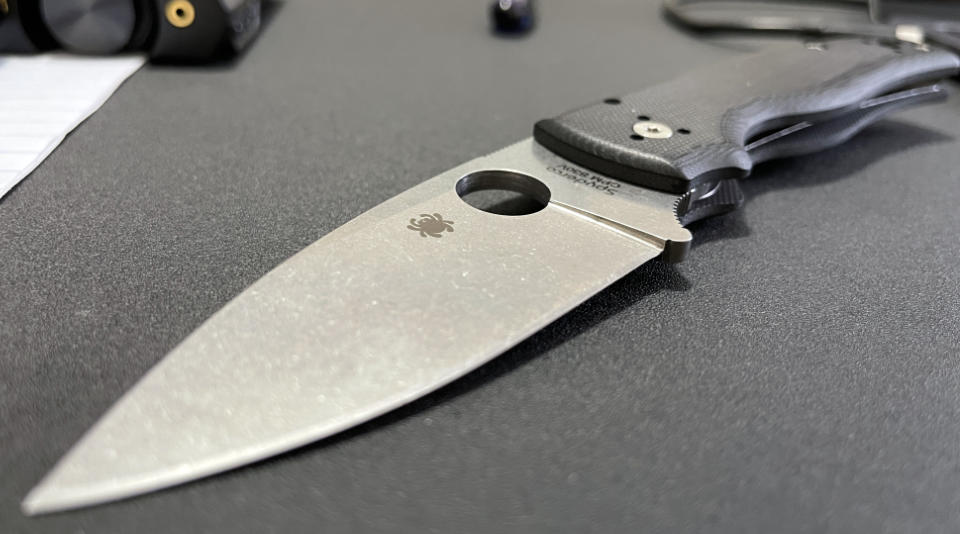 This knife isn’t new, and my getting my hands on it to review certainly wasn’t blowing doors open for any knife enthusiasts. But in a way, using a product with so much fanfare already in existence can be a strange experience.

In some ways you’re excited to be wowed the way so many others before you have described it. Maybe it’s tough for it to live up to that hype.

There are aspects of the Spyderco Shaman that I really like and I can see what the fuss has been about these last few years. (Such as the ergonomics when holding it and the abuse it can take.)

I review audio gear like headphones on and off as well, and when you slide on a good pair of high-end headphones it’s usually obvious right away, from the way they feel on your head to the wow factor on the first song you listen to. You can tell you’re wearing a premium piece of audio equipment and you know where the money went.

And if you totally don’t have that feeling at first, it’s hard not to let that color your experience thereafter as you dig further in. Everything you do like about it will be held against that initial disappointment. Against other headphones that didn’t disappoint.

As excited as I was opening the box initially, my first time using the Spyderco Shaman brought a couple things to light that I couldn’t help but find disappointing.

They stuck out immediately, from the first time I opened up the knife.

The Opening and Closing Action Is Only Average

Sure, this might improve with time and rigorous usage. That’s not unusual for knives and multitools. And the action did improve once I disassembled the Spyderco Shaman, polished the moving parts, and applied some mineral oil as lubrication.

While I tend to do this with most of my knives at some point, I couldn’t help but feel like a knife that costs (at this point) $200 should wow you from the first open. As in, the fit and finish should be excellent and the action should be buttery smooth.

Isn’t that part of what you’re paying for in a higher end knife?

(That and, the action still isn’t what I’d call buttery smooth once lubed, just better.)

To me the action is only somewhat better, out of the box, than the Spyderco Tenacious (which costs a quarter of the price). The Tenacious also sports a fairly beefy blade.

There’s nothing inherently bad about the Shaman’s action. It’s just not great, either, in my opinion. It’s something I’d overlook on a $50 knife, but not for 3-4x that price.

(Particularly since I have $50 knives with better action.)

The Thick Wedge Shape of the Shaman’s Blade Is Strong, But Only Average At Slicing.

I tried to really put this knife through its paces on a variety of cutting tasks.

In one case, after cleaning the blade (and because I use food-grade mineral oil as blade lube) I used the Shaman to cut carrots and slice potatoes while prepping dinner.

“Yeah, but this isn’t a kitchen knife,” I hear you saying.

I ran into that cutting cardboard as well, much more so than other knives I carry regularly. (Notably, the Civivi Elementum which is an excellent all-around pocket knife.)

Sure, I recognize that different blade shapes and thicknesses excel at different things. But a lot of the reviews out there about the Shaman mention that despite its size it’s an amazing all-purpose knife. A couple reviews I recall watching even said that if it were the only knife you could have, it would be amazing at it.

Not sure I can agree with that given how prevalent slice cuts are for an EDC knife — in my experience anyway.

This knife is great at cutting rope, twine, plastic ties, and stuff like that. Heavy duty stuff. But for other things a person is likely to reach into their pocket and pull out their knife for?

Other knives do it better for far less money.

The Shaman’s Compression Lock Feels Awkward, To Me Anyway.

A lot of people praise the compression lock (on the spine of the handle) for its lock strength and cool factor.

For me, though, there never seems like a natural one-handed way to close the knife without fearing it’s going to close on my fingers still holding the handle.

I’ve never had that issue with liner lock knives, which feel very natural (and smooth) to close up.

I find that I often need to close the knife two-handed like I would a lock-back knife, like a Buck 110 for instance, for it to feel safe.

There are plenty of videos out there of people doing it one-handed and making it look smooth. Probably if I practiced at it it’d get a little easier.

But ideally a knife’s design should feel natural to pick up and use right away, and if you have to practice for basic functions to feel right… I dunno.

I’m not sold on the compression lock design on such a large knife.

There’s a lot to like about the Spyderco Shaman, and in many ways the fuss that’s been made about it is well deserved. If you’re looking for a large pocket knife that could take some abuse out in the field, it seems like a stout choice.

The ergonomics and sheer build quality are excellent.

But like I said about, I also feel like there are some aspects of its function that should be better for a knife in the $150-250 price range.

I suspect I’m not alone in thinking that a knife in that range should have a truly premium feel every time you open it. And if you don’t feel like aspects of the knife that come up every usage are a clear win over significantly cheaper knives in your collection, it’s hard to shrug that feeling off.

As I kept using the knife I wanted to love it. I thought of all the other reviews where people gave it near-universal praise. But after a week of carrying the Shaman exclusively, I kept feeling the urge to go back to my Elementum as my everyday knife.

The Elementum is thinner, lighter, better in the pocket, and has both a more useful blade profile (for my uses) as well as far smoother action.

For a specific usage knife, sure, I’m happy to own the Shaman. But I don’t see it being part of my regular EDC rotation.