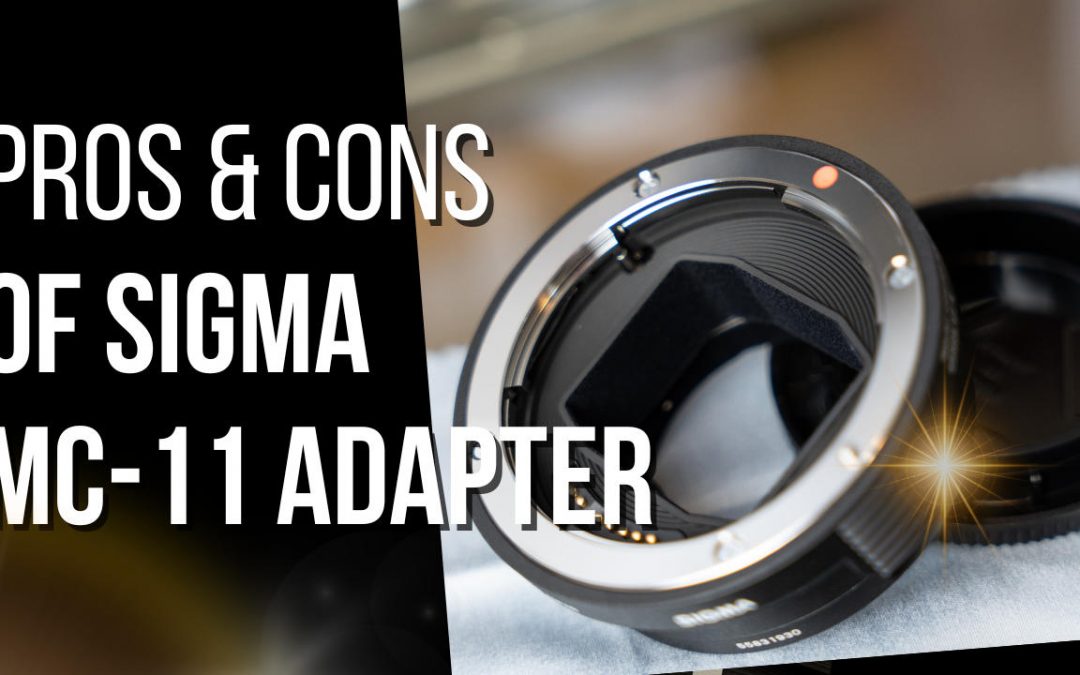 For anyone considering changing systems, the idea of having to start a lens collection over again is probably the biggest “ugh” that stalls everything out. Any adapter, then, that claims it can take EF lenses and make them work on a Sony E mount system has my attention.

The idea that one could take a collection of Canon EF lenses and seamlessly snap them onto a Sony Alpha camera would be a huge head start to a new camera system.

But does the MC-11 adapter work as smoothly as it claims?

Mostly yes, but not in some key ways.

What The MC-11 Adapter Does Well

The build quality is nice on this adapter, and it visually blends very well with Sigma lenses. In my case, I first used it with the Sigma 24-70 OG HSM Art lens. The adapter complemented the big lens’ natural flange, and seemed to support its weight well with no flex.

Key features the A7IV offers that were preserved for photos were AF-S and AF-C, as well as eye-AF. The Sigma Art lens had no trouble tracking eyes and faces, and seemed to do it just as quickly as on the Canon EOS R (via EF-RF adapter).

When taking photos of my son while bouncing and crawling around, the autofocus did a good job of keeping up. This is where my excitement for the adapter reached its height.

The idea that my 24-70 Art lens could be used interchangeably between my EOS R and A7IV seemed like an unparalleled level of flexibility.

While the MC-11 adapter only officially supports Sigma lenses, I was able to successfully use a Tamron SP 35mm USD lens with it as well, and many have reported successfully using certain Canon EF lenses with it. Your mileage may vary.

The only caveat I noticed when using the Tamron lens is that, while the autofocus still worked fairly well, the camera did not identify the lens like it normally does in the EXIF data, and so all images I shot with the Tamron lacked auto lens corrections in Lightroom.

The Bad: Lack Of Video Autofocus

It’s strange to me that the adapter can do as good of a job as it does preserving continuous autofocus for photos, yet lack the ability to autofocus during video recording.

At first I thought it was a firmware issue. Perhaps something was out of date, and a simple update would solve it all.

Unfortunately, after confirming updates with this MC-11 adapter, via USB, updating the Art lens’ firmware, and ensuring the A7IV was on the latest firmware, the issue remained.

After watching half a dozen YouTube videos on the subject, reading reviews, and consulting Sigma’s own literature about the MC-11, I came upon this little statement buried in the fine print at the end:

Video capture requires manual focusing. That might be ok for some users, but personally when I film myself for videos the idea of arduously getting my face in focus and then not being able to move without losing focus is a deal-breaker.

What’s even more unfortunate about this limitation is that many have reported the competing Metabones EF->E adapter does allow video AF. While it’s more expensive, it’s also entirely third party made (versus Sigma, who makes lenses).

You’d think Sigma would’ve been able to preserve video AF, given that they also make the Sigma lenses this adapter is for. If anyone could, right?

One other note about the MC-11 adapter is that it is not weather sealed. The Metabones adapter evidently is, by comparison.

This may not matter much to some users. If you are unlikely to shoot photos in inclement weather, or in dusty areas, this is irrelevant. But if you’re a professional, particularly a travel photographer, this may be a con worth considering.

The MC-11 adapter is a fairly affordable option for preserving your EF lens collection when switching systems, or to allow two camera systems to share one set of lenses.

When it works, it’s a stellar and you’d never know the Sigma lens wasn’t natively made for the Sony E mount.

Apart from the major downside of lack of video AF, the autofocus experience for photos is excellent. If you are primarily a photographer with Sigma lenses, this adapter should be perfect.

If you’re into video however and want to use your EF lenses for production, keep looking.