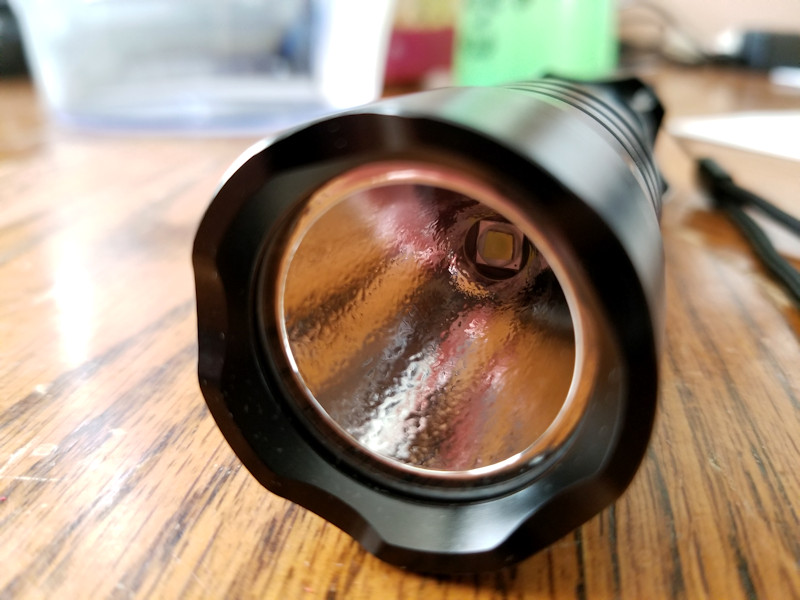 After a string of Olight flashlights reviewed it was a nice change of pace to check out Odepro, a manufacturer I’d not checked out before. In this case, my introduction to the brand is the TM30 LED light. Odepro markets it as a hunting and law enforcement light, and there is an optional (sold separately) rifle mount.

Whats In The Box: 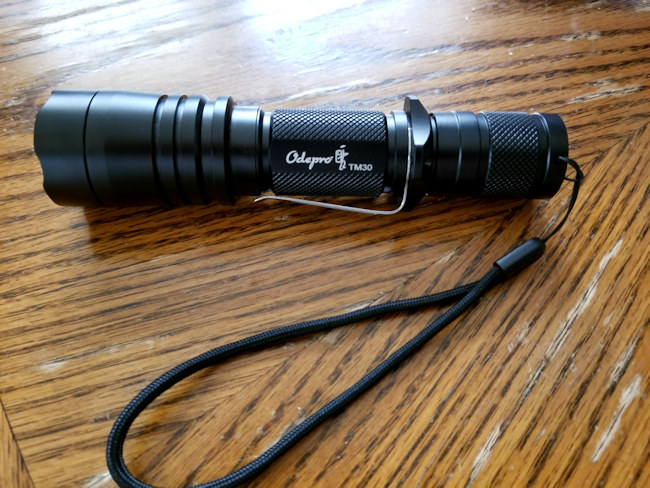 One thing that struck me right off the bat about the Odepro TM30 is the deep bezel. It’s probably twice the depth of any of the Olights I’ve reviewed, and generally speaking bezel depth relates directly to throw distance. I don’t actually own any serious throwers currently, so I was interested to see the difference when I took it outside at night.

The build quality is excellent, particularly for the $49.99 USD price point. There’s no battery rattle, and the tail cap screws on (and removes) smoothly and snugly. The included lanyard is a nice length, and comes pre-attached. This is a plus for anyone that finds threading the lanyard through the small holes at the end of flashlights to be a pain.

The TM30’s Beam Length and Modes

My yard is about 60 feet (18.2m) deep. While that’s not far enough to fully test the light’s advertised throw distance, which I did elsewhere, it served as a great comparison to other lights I’ve auditioned. For most other lights, it takes the High and Turbo modes to reach the end of my yard pretty visibly.

Much as I expected to see with the TM30, it easily reached the back of the yard on its medium mode and up.

Getting that kind of distance on lower modes is a nice feature, and not something I’ve seen on the last few flashlights I’ve auditioned.

This light also has a cooler color tone to the LED than other recent light’s I’ve auditioned. It teeters slightly toward blue tone rather than yellow, which looks nice against trees at night per the light’s intended purpose.

If you’ve looked at the specs you’ve probably noticed the Turbo mode is 560 lumens, which might surprise you with all the 1000+ lumen lights out there. Let me say that although I don’t have a light box to measure exact output, anecdotally this light is brighter than it seems. Its relatively wide/deep bezel for a light this size allowed it to light up my whole yard on Turbo nearly as well as higher output lights I had. The sheer distance it can throw versus some of the brighter lights I have gives the perception of more light.

Plus, a lot of the 1000+ lumen Turbo mode lights will only stay in Turbo mode a couple minutes, after which point they’ll step down into High mode either to preserve battery or to mitigate heat. With the TM30, as far as I could tell, it will stay in Turbo mode as long as the battery has the voltage to support it.

The front of the bezel features a striking edge, which is a feature that is pretty common in tactical flashlights. Odepro’s information on the TM30 say this bezel can also break glass, presumably if you’re trapped in a vehicle and need to escape.

The octagonal shape where the pocket clip connects keeps the flashlight from rolling around when set on a table, and features a secondary hole through which you can attach the lanyard.

I like the momentary-on feature of the tail cap, but the mode switching button on the side of the tail took some getting used to. If you hold the light “icepick style” — that is, with your thumb on the tail cap — this button’s placement feels natural and is fairly easy to switch modes on the fly. To use the light in a regular grip style, with your thumb near the bezel, it’s a bit awkward in the dark to find the button.

Admittedly in my experience I’m not often switching modes a lot once the light is on (other than when auditioning the flashlight), but it seemed worth mentioning from an ergonomics standpoint. One thing that would be an improvement for Odepro on future lights would perhaps be a glow in the dark button for mode switching to make it easier to find.

Given this flashlight’s ability to go both wide and throw a good distance, it would indeed be solid for law enforcement.

Find the TM30 on Amazon here!