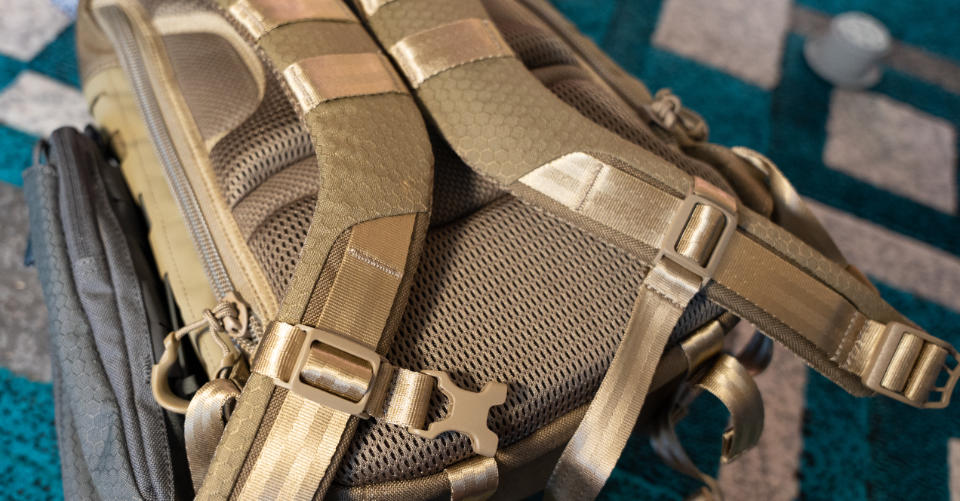 Two things I have come to prize over the last year or so, especially as I’ve gotten more into photography: still having maneuverability and having the storage be tight and organized.

One of the larger Swissgear backpacks I’d been using (18.5″ tall, 8.5″ deep, 12″ wide) was nice in several ways, but the main compartment was so spacious and the dividing materials so floppy that it made for a poor place to store a camera or lenses while out and about, because it provided no support.

The Riftpoint surprised me as a pack that I probably would’ve thought was too small to be useful years earlier, but after briefly using a Greenroom136 MetroRunner sling bag, I became more open to small EDC.

The Riftpoint is excellent to carry.

The smaller size and light weight is something you can appreciate from the first time you’re out walking. But more than that, the mix of 500D and 1000D material and tight design means it doesn’t flop around as you move.

I can even jog with the pack and it stays put and doesn’t make a lot of noise.

That was definitely not the case with the larger Swissgear bag I’d been using.

The sternum strap does help take the stress off the shoulders, even on a small backpack like the Riftpoint.

…are the best that I’ve ever had in a backpack. The clever mix of ultra durable 1000D on high-stress areas and more flexible 500D on other spots makes for a bag that feels substantial. It’s obvious you could beat the hell out of this bag and it’d hold up.

The zippers are equally robust and fairly smooth to open. The occasional exception would be on the corners, where I suspect it’s the material covering the zipper teeth for water resistance that sometimes make the zipper less smooth than it could be.

It’s not been a real issue for me and I suppose it’s a fair tradeoff.

The Atlas webbing, which is Maxpedition’s proprietary version of PALS webbing, is strong and looks modern. I’ve attached water bottle holders, flashlights, carabiners, and keychains to the Riftpoint’s exterior with the Atlas and it works great.

I also appreciate the Atlas webbing’s somewhat less tactical look than traditional molle/PALS bags. (This is what the AGR line, which the Riftpoint belongs to, is going for.)

I do street and urbex photography, among other types. The ability to stow my camera when needed on the go, and bring additional lenses, are important.

What I don’t like about traditional camera gear bags is that they’re so specialized for that usage that in my opinion they’re not useful for anything else.

In this case, the Riftpoint’s reinforced back and firm main compartment made for better camera storage, albeit a bit cramped because of the limited 15L capacity. With the right kind of padded lens cases and/or a sleeve for the camera, the pack did just fine for a minimal carry.

I could fit my Sony A7IV and a spare lens or two inside with no trouble, as well as some other EDC items. Of course, if my big Sigma Art 24-70 was stored in the main compartment it really chewed up the space. But smaller lenses like my Tamron 35mm f2.8 or Samyang 45mm f1.8 were easy.

With the right water bottle holder attachment on the outside, you could also store smaller lenses in that while on the go for easy access.

I got the color Maxpedition calls “tan”, but one look at it and it’s clearly more green. I was expecting more of a sand color, and honestly would’ve preferred that.

The main other issue I have with this color is that Maxpedition only seems to offer bottle holder molle attachments in black or grey, but not tan. So as you can see, I have a greenish color pack with a grey bottle holder. I figured as mismatches go, the grey would work better than black with this color.

Last one that’s a bit of a nitpick: the bag doesn’t stand up reliably on its own. Because of the front pockets that protrude from its frame, it has a tendency to fall forward. Not a big deal as long as you lean it into something, but it being able to sit on its own would’ve been a plus.

Especially since having to lean it front side into something rather than backside into things means getting into the pockets is not as accessible.

I think the Riftpoint is an excellent EDC bag and a workable camera bag. The latter is true as long as you’re looking for a minimal carry and not the giant bag setup like some photographers use where they’re carrying all or most of their lenses with them.

The backpack’s construction is very strong and the internal storage organization is pretty versatile.

If I were doing it again I’d go with the grey version of this pack rather than “tan” for a somewhat more subdued look, but otherwise I’m happy with it as an EDC and get home bag.

Buy one for yourself and support the site at no additional cost to yourself via my affiliate link.