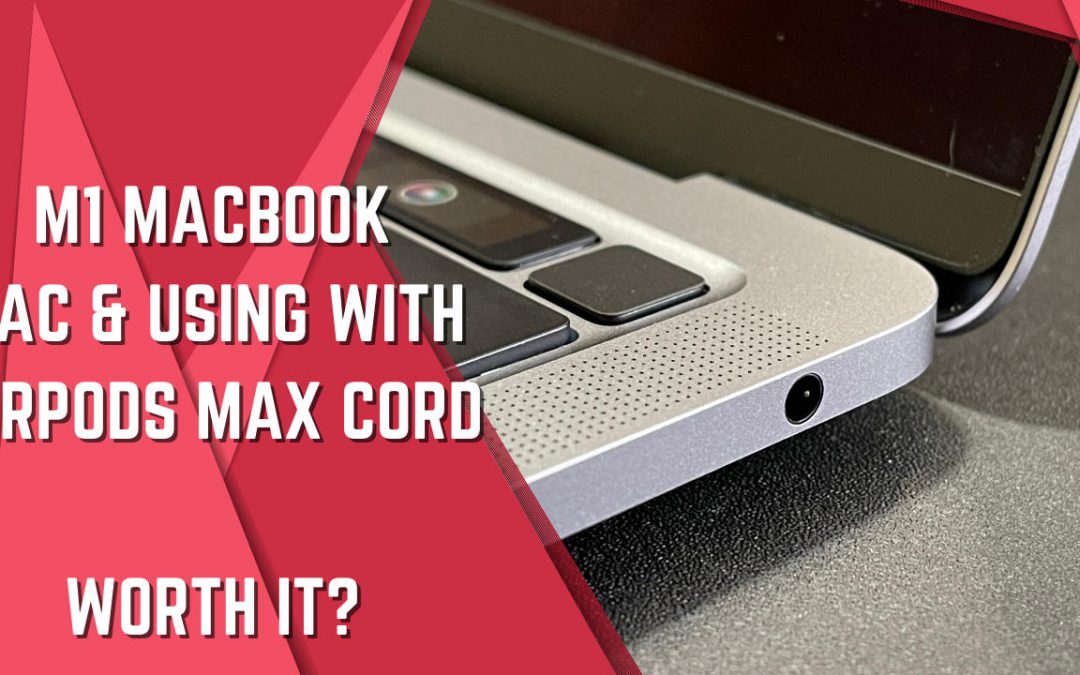 When I did my video on the AirPods Max, as well as using the cable with external DACs in the past, it seemed well received but I noticed a lot of similar questions crop up. In thinking about how to tie answering those questions with a video, as well as talking about the M1 MacBook Pro, I thought I’d take a look at the DAC and 3.5mm interface the MBP has built-in, as well as my experiences thus far using various headphones with it – with and without an external headphone amp.

It’s tough to nail down exactly what DAC Apple uses in the 2020 M1 MacBook Pro. It’s not in the listed specs, and isn’t discussed on any reviews sites that I saw.

I plugged in my old Denon AH-D5000, both because they’re great sounding headphones that can really take advantage of a good DAC, but also because they’re 32 ohm as opposed to some of my headphone cans.

At about 65% MBP volume there’s decent loudness, but I do notice what I’ve always noticed with headphones that really need more amplification; the mids and highs sound decent but the sound is somewhat flat, and there’s very little bass.

Now mind you, the D5000s are bassy headphones. So the lack of punch in the bass, to me, is telling about the jack.

Aside the anemic bass, the general presentation was fairly solid. Instrument detail was clear, though the sound stage was only average. Guitar plucking and violins had pretty good body.

In a pinch, it would definitely do with lower impedance headphones, and sounds better detail-wise than the onboard sound from the last several PCs I’ve owned, including the Surface Pro.

I suspect the additional headphone jack power promised in the new series of M1 Pro and M1 Max MacBooks would improve dynamics quite a bit. The new headphone jacks are described as being geared for high impedance professional headphones, and I’ve definitely noticed that speakers and headphone alike benefit from a lot of amp headroom (as a general statement).

In my case, having to go to 65+% system volume for decent listening volume leaves too little in reserve for those peaks that give headphones their musicality.

Once I plugged my G6 into my USB hub and ran the headphones out of that instead, everything that had been missing was there. Ample bass, big, lively sound, and a more detailed sound stage where the instruments didn’t simply sound good, but sounded distinct.

If you’re mostly using corded earbuds or other very easy to drive headphones the built-in jack is probably find for you. Those with larger headphones, especially above the $150 price point, would definitely benefit from better amplification. You could probably get by with the DAC the built-in jack uses and just run it into a headphone amp.

If you’re in the Apple ecosystem it’s possible that you’re using AirPods of some kind. If you have the AirPods Max and were wondering about using the 3.5mm to Lightning cable rather than bluetooth, I’d say don’t bother if you’re using the built-in audio.

When I tried it there were no noticeable benefits to bass or sound stage like there are when I used the cable with the G6.

This says to me that the DAC itself is perhaps more to blame for the weak bass than only the lack of amp power, since the APM use their own internal amp that always has enough power and are mainly taking the signal from the 3.5mm jack. The fact that the bass doesn’t really seem noticeably improved with the cable versus bluetooth — but it is improved when running the cord out of the G6 — suggests the built-in DAC may be a bit lacking.

If so, even the additional power of the jack on the newer M1 Pro and M1 Max MacBooks may or may not be adequate. After all, extra power for bass is only helpful if there’s ample bass in the source signal.

I could see a argument could definitely be made that as a Pro device, the MacBook Pro should have a high end DAC and strong headphone output built-in, or at least available as an upgrade. Since video and sound production are common uses for MacBooks, and headphones pros use for those things are generally expensive and high-impedance, the use cases and requirements go hand in hand.

For music listening, one of the drawbacks here is the lack of a system-wide EQ. And since Creative doesn’t support Mac with its external sound cards like the G6, the G6 will function properly when plugged in as a DAC and headphone amp, but you don’t get the extra niceties the software provides, including EQs.

Do I need a DAC if all I do is Spotify?

If you have higher end headphones over $100, you don’t necessarily NEED a DAC, but you could certainly benefit from one.

One misconception I’ve seen is that a good DAC is only useful if you’re listening to lossless audio at 24-bit. That’s where this question stems from, I think, that if you’re “only” using Spotify with compressed audio there would be no benefit with a DAC.

That’s never been my experience. Even on a 256kbps to 320kbps MP3, the difference between a basic DAC and a high end one is pretty noticeable. High bitrate MP3 or AAC still has plenty enough detail that a good DAC will really reveal a lot as long as your headphones themselves are capable of good detail.

The only exception I can think of is if you’re using the free version of Spotify at a lower bitrate. I think at that point you’re probably more into just having music on than high fidelity audio, so it’s probably not worth it.

Generally speaking, though, my experience has been that a higher end DAC will expand the following benefits to your audio:

As opposed to what you might refer to as a flatter sound.