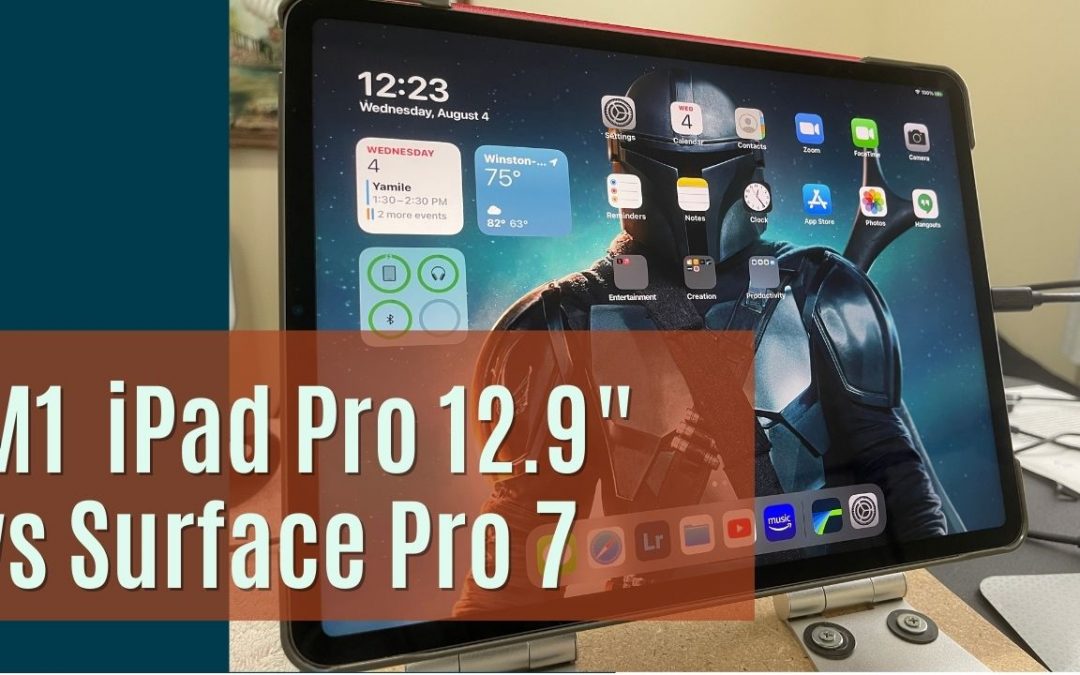 As a little preface, these are my impressions using the iPad Pro 12.9″ as my primary computer for business and my personal life few a couple weeks. Until recently, I’d been exclusively a Windows guy since childhood, and had used only Android phones.

2021 is the year that I have, bit by bit, switched to an Apple ecosystem.

Prior to trying the M1 iPad Pro 12.9″, I’d been switching my time between a gaming PC and my Surface Pro 7. The Surface Pro is the Core i7 model with 16GB RAM.

For a week straight at minimum, I decided, I would use the iPad Pro exclusively for all facets of my life. I would avoid turning on my Surface Pro 7 unless I ran into something crucial that I absolutely could not do without it. (That didn’t end up happening.)

And so, for a week it was just an iPhone 12 and an iPad Pro to manage my life.

With that as the background, here we go.

Physical UI of the iPad Pro vs. Surface Pro 7

Both tablets are pretty similar in size, with the iPad Pro being slightly taller and the Surface Pro’s screen being slightly wider. It is nice on the Surface to have a dedicated charging port apart from its USB-C (as well as having a USB-A port as well) versus the singular USB-C port on the iPad.

However, I made the switch to using a bluetooth keyboard and mouse with the iPad and alleviated much of my need for the USB-C port for peripherals a lot of the time.

Physically speaking, the two are pretty similar with a power button, two volume buttons — with the notable absence of a 3.5mm jack on the iPad Pro that the Surface Pro does have.

The Surface Pro For “Pro”Activities

Prior to getting into this myself I’d read others criticizing the iPad’s inability to use certain “pro apps”like Final Cut Pro etc.

Luckily for me, every production app I’d used in Windows had a pretty clear analog in iPadOS — and in many cases the interface layout was pretty similar.

With those apps, I felt pretty comfortable recording and producing videos, as well as manipulating images for work.

The majority of my work involves:

…And so I’m not really a videographer but I do need video production tools. I’m not a graphic designer but I do use design software to some degree.

Aside video and graphical work, a huge chunk of what I spend my time doing is writing within the web browser. To that end Safari does a pretty consistent job to having used Firefox on PC for my web tools and WordPress sites.

LumaFusion reminds me a lot of Camtasia as UI goes, except that in some cases Luma Fusion has more options. Scrubbing back and forth was definitely smoother on the M1 iPad Pro, and I didn’t notice any stutters after adding transitions and other effects playing the preview like I often do on the Surface Pro.

The Surface Pro is a champ for web browsing and web tools, for the most part, but I often felt like I was straining the device in photo software and for video editing, even though I’d gotten the top of the line model.

Rendering the finished video into an MP4 was also roughly twice as fast on the iPad Pro. In one case I rendered an 11 minute long 1080p video in 3.5 minutes on the iPad, whereas similar length videos in the past on the Surface Pro 7 took more like 6-8 minutes.

That obviously becomes a much more noticeable difference when you’re editing a 30-40 minute video. (I’ve certainly had 25-35 minute renders on the Surface.)

iPadOS For Workflow (and RAM)

For the most part I’ve found iPadOS to be pretty easy to use even switching back and forth between apps. However, a few times I did really find myself appreciating the ease of actual app windows you can click and move around.

Sure, you can split screen on iPad, but it still feels a bit more cumbersome than what I was used to on PC — or what I’d suspect MacOS users are also used to.

I was pleasantly surprised, however, that having half the RAM of 8GB never presented an issue despite having a browser with a dozen tabs open while switching between Microsoft Word, LumaFusion, and even Netflix or Lightroom. None of those apps refreshed when I switched back.

You must be able to do pretty much anything on the 16GB RAM version of the iPad Pro.

The iPad Pro has a lot of flexibility for peripheral devices. I tried a couple different USB mics, such as the Yeti X and the Fifine 668a and both of them worked immediately with no software needed. For video production, that was great.

I also plugged my Sound BlasterX G6 in via USB hub and it worked without a hitch as well — even without Creative’s “Sound Blaster Command” software. The G6 continued to be an excellent headphone amp for my Beyerdynamic DT1990 or other cans, and could also take a mic input through the G6’s input port.

While the iPad Pro cannot currently format external drives, which is a bummer for a “Pro”device, it can use anything formatted as exFAT just fine. My 1TB Western Digital drive worked pretty well, albeit that folders with lots of images did seem to load previews slower on the iPad than on the Surface Pro.

The M1 iPad Pro With A Mouse And Keyboard

Using the scroll wheel of 2 Logitech mice I tried could be smoother on the iPad, and is a better experience in Windows. However, cursor speed, click sensitivity etc. were solid on the iPad, and very rarely did I encounter a missed key using a bluetooth keyboard.

These two peripherals are make or break for me to use the iPad Pro as a work machine, and thankfully I had a good experience there.

That is, after I figured out that contrary to advice I’d read initially about using “Touch Accommodations” in the settings, the mouse actually works way better with it off.

With it on, while it’s cool to be able to click and scroll the screen like with your finger, it also makes roughly half your clicks not count because it thinks you’re trying to move the screen and not… click on something.

In some apps, like LumaFusion, scrubbing back and forth can only be accomplished using your finger or with an Apple touch pad. You can’t do it via mouse — at least that’s been my experience.

It wasn’t uncomfortable or a pain to use my finger, but that was definitely one major UI difference from using Camtasia on PC.

One other thing I’d recommend to any PC user coming over to iPad: under Keyboard settings you can use key substitutions to make the CTRL key function as the CMD key the Apple uses so that shortcuts you’re used to like CTRL+C, CTRL+T etc. work the same as on PC.

That was a pain point for me when CTRL kept doing nothing and I had to deliberately hit a key 2 spots over, and felt A LOT more natural once I figured out the substitution.

iPadOS, as a mobile OS, is obviously lighter weight than full-on Windows 10. The iPad Pro could handle everything I threw at it with 8GB RAM, half of what the Surface Pro 7 has.

But perhaps far more striking is the difference in processing power, heat, and power consumption to make that happen.

Rendering videos, especially, cause the Surface 7’s fans to kick on and for the back of the tablet to feel hot to the touch. My wife has even put a fan blowing on hers for Zoom calls to try to control the temp.

The iPad Pro, on the other hand, not only renders videos faster but is barely warm to the touch afterward with no fans internally to cool it off. That’s right — with only passive cooling it stays far more cool than the Surface Pro while completing complex tasks faster.

Part of that may simply be a testament to the efficiency of the M1 chip or even the iPad’s internal design.

But in computer components heat is often a function of power usage.

We can tell a lot about that by observing that both the M1 iPad Pro and the Surface Pro 7 report 6-8 hour battery life of continuous screen time.

How do their battery capacities compare?

The Surface Pro’s is around 40,000 mAh, while the iPad Pro’s is around 10,000 mAh. So the end result is a similar overall battery life, but one device requires 4x the battery to make that happen.

When that same device struggles with thermal issues for more than the other, it says a lot.

The Surface Pro 7 always struck me as a pretty good portable Windows 10 experience, so long as I held it in the context that I was sacrificing performance for portability. Some things it did really well, and other things felt like I was pushing it to its limits.

Little lags opening apps, switching from vertical to horizontal view, and struggles editing videos (and particularly waiting for them to render) didn’t ever leave me with the feeling that I was using a premium device for the money.

The iPad Pro, however, felt buttery smooth in all animations, and video editing was far faster. I was surprised at the degree to which I didn’t feel like I was sacrificing anything in performance for the portability.

Little things like the extra USB ports and SD card expandability about the Surface Pro are definitely nice, but overall aren’t enough in my opinion to balance the scales against how much better the iPad Pro is at being a tablet AND a work machine.

I went into this saying I’d do it for a week and see. Well, that week has come and gone, and I’m still using the iPad Pro each day and haven’t powered on the Surface since.