Is the iPad Pro Really… Pro? 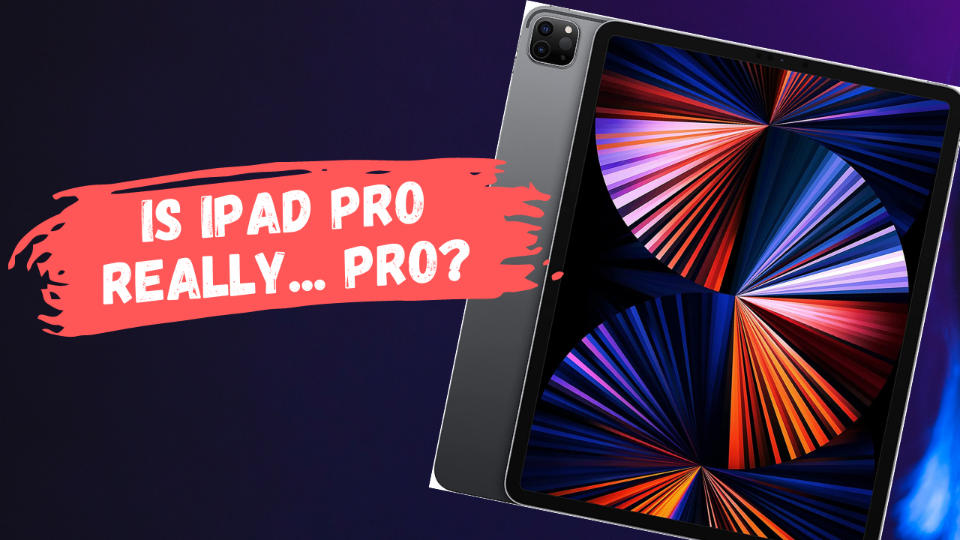 I like the M1 iPad Pro a lot. I’ve even been using it primarily instead of my Surface Pro for a month now, for some background as a lifelong Windows user. However, as much as I like it in many regards, there are some glaring shortcomings that really do grate some days.

1. Some Platforms Require Use of Clunky Apps Rather Than The Website For No Good Reason.

I’m looking at you, YouTube. On a “real” computer you can upload a video through the browser and edit all parts of it right there as it uploads, taking it from draft to live in just a few clicks.

For no good reason, YouTube won’t allow you to upload videos through the browser. It will act like it will, but the upload (for me) always stalls at 6% and otherwise forces you to upload using the YouTube app.

This wouldn’t be a big deal, except that the app has a clunky upload interface that only allows you to edit the title and description as it uploads, and if you need to circle back and add a thumbnail or edit anything else, you then need to ALSO use the separate YouTube studio app. Two apps for one function.

And that YouTube app will only pull files from your photo gallery, meaning if you’re storing your video projects in the Files area like probably everyone does, you need to copy the video into Photos just to upload, just to have to delete it or move it back afterward. Same for thumbnails for no good reason. Stupid app.

You know how in the browser you can click over to YouTube studio and access the audio library really easily? Well, not in the app. In fact, I couldn’t find any way to do it at all, and since it absolutely will not allow you to access YT studio in the browser (force switching to the app) there appears no way to check out audio tracks from the iPad.

I’m guessing there must be some way to work around this since there are other creators that say they exclusively use the iPad… but I haven’t found the workarounds yet.

These aren’t the fault of the iPad itself, but rather stupid development on other major platforms that unfortunately affect iPad users all the same in a needlessly negative way.

2. Relatedly, Some Sites Can Tell You’re On A Tablet Even When You Tell It To Always Insist Upon The Desktop Version.

And then those sites either try to serve you a mobile version of the site, or BS you about loading the site because they insist you get their app instead.

If the iPad can’t forcibly render pages as a computer and avoid being boxed in as a mobile device, it loses some of its capability to be a “real computer”.

When you try to access Google Drive through the browser you’ll see a pop-up prompting you to get the app. There’s a dismiss button, but interestingly Google makes it so clicking on it with a mouse or tapping it with the Apple Pencil doesn’t work. Only an actual finger click dismisses it. Why? No idea other than to deliberately make the mobile experience worse without their app to pester you into switching.

Again, these things aren’t necessarily Apple’s fault (but rather who runs the websites forcing stupid restrictions), but regardless of who’s to blame it still makes for a worse experience for iPad users.

3. Safari Lacks Some Simple Features in iPadOS For Seemingly No Reason

Do you want to be able to right click and inspect element, or view page source? Can’t.

For a lot of people that may not matter, but try to do any kind of development work with that limitation and see how quickly that feeling of, “I can definitely use this as my only computer,” drains away.

You also can’t use any browser extensions for Firefox or Chrome. This bit I understand is for security reasons, but I don’t see a reason that makes sense for the view source bits.

In some builder tools for website design, such as Hubspot’s builder or Elementor for WordPress, the bar that sits along the top and bottom of the screen respectively to save drafts and publish pages often gets cut off as you scroll up and down the page.

And once it’s cut off, it doesn’t come back scrolling fully to the top or bottom. The only solution is to refresh the page, at which point you’re relying on autosave to pick up all the changes you’ve made.

You’re hoping that after the reload your changes stay intact and you can now formally save them with the bar back — until it disappears again.

This isn’t always a draw back if you get a new drive that’s already formatted as exFAT – the format Apple wants you to use.

But if you have an older drive in NTFS, or even if you just want to quickly wipe the drive, you can’t.

iPadOS offer no options to format external drives, which if you actually tried to do the “only an iPad as your computer” approach you’d be dead in the water.

Apple says you need to connect the drive to a “real computer” (Read: MacBook) to do this.

Hopefully they’ll add this feature in a future software update since it’s not really a big ask.

Yep. That means you need to keep the app forefront the entire render process or you’ll bork the whole thing.

The minute you switch to another app, the export fails, and thus far I haven’t seen a setting or tweak that resolves this.

It’s not a huge deal for shorter videos that are done quickly, but it’d be nice to be able to take advantage of the M1 chip’s multitasking abilities and work on something else while a longer video exports.

As a pro device where it’s conceivable you’ll have several work apps open at once, being able to switch gears and work on something else while a video exports is not a big ask. And it’s something that any Surface Pro or MacBook can do.

Sadly, yet another way that the iPad Pro doesn’t fully replace a “real” computer.

Numerous tests show that it vastly under-performs in terms of copy speeds compared to a MacBook with the same Thunderbolt port. No one knows why.

Weirder still, when connecting an old mechanical 1TB external drive I notice that folders full of images load previews pretty slowly — much slower than on my Surface Pro 7 tablet using a USB-C port without Thunderbolt.

Actual file transfers might have been quick, but spooling those previews? Not sure why so slow.

Sure, it’s still fast enough a lot of the time, and if you were using the iPad Pro as your only computer with no comparison to anything else you might think little of it.

But it seems weird to have a device boasting about some super fast new USB port that doesn’t reliably transfer faster than older devices, or ever actually reach the speeds that Thunderbolt itself is capable of like other devices can.

In WordPress’ block editor, for instance, using the mouse to switch the cursor between different content blocks always lags for 1-2 seconds before the cursor actually goes there as if the computer is having a hard time making it happen.

If you use your finger or the Pencil to do it, it’s instantaneous.

Same for LumaFusion, where using the space bar to play/pause has a half second delay between presses and either actually happening for some reason. If you use your finger to tap the play/pause button there is no lag.

Dismissing it as Bluetooth lag doesn’t seem right, since I’ve not encountered noticeable lag like it in any other scenarios with a mouse or keyboard.

Not sure why this happens, but it’s consistent.

Opening just the Files app takes you to a nice interface with your different devices on the left, including shortcuts to your favorite folders. That’s handy.

Any time you’re in an app that wants to find a file from Files, it will often go to the last folder you used, and there’s no way to go anywhere except clicking Back at the top a number of times to get back to the root directory, and then you see your favorites.

If Favorites were always accessible, you could side step a bunch of nonsense for repeated uploads or accessing different folders.

By default, anything you download in a browser simply goes into your iPad’s “Downloads” folder. It’s easy to find, sure, but it also creates a nonstop extra step for you to go into that folder and copy it wherever it actually needs to go.

Something that is not an issue on actual computers, and if you find yourself doing this repeatedly in a work day becomes tedious quickly.

And if you’re busy and think, “I’ll come back to it later,” a few times, you might end up with a long list of files that might have similar file names. Then it can be a real pain to sift through them, find the one you want, or decide arduously one at a time where all of them go.