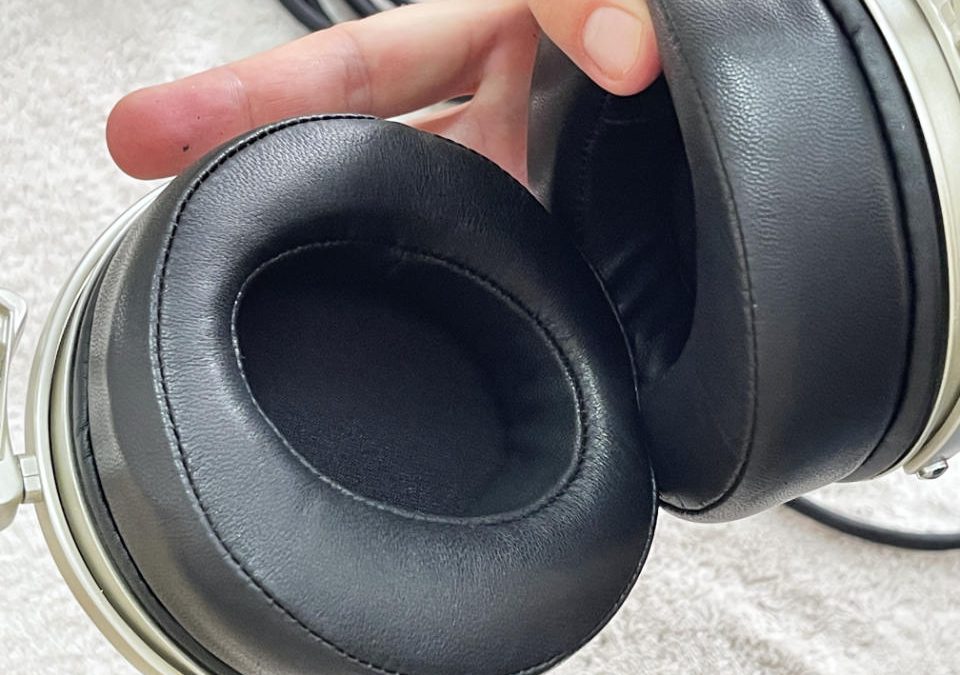 I’ve had the Denon AH-D5000 for over 10 years as I write this. They weren’t the first pair of high end headphones I’d owned, having tried the Sony X5000 and AKG K701 earlier. But they were the first pair where I liked everything about their sound — where music just sounded right to me.

The bass was lush without a ton of EQ, instruments sounded full of detail, and highs were sparkly without sounding shrill. They were exciting-sounding headphones rather than the more clinical (and somewhat soulless) sound of ones I’d used before.

Over many years of use the earpads were worn and tattered and the headband hardly had any material left in the center.

I switched to using other cans like the V Moda M100 as daily drivers and only used the Denons every now and again.

In 2021 I was offered a review copy of the Beyerdynamic DT 1990, and was absolutely blown away by their sound. The soft velour earpads were super comfortable, felt top-notch, and once again just about everything about the sound impressed me.

The DT 1990 are a bright headphone, for sure, but after I re-padded them with the Dekoni Elite Hybrids it softened the 8KHz range just enough while leaving the highs crisp, and punched up the already good bass into head-bobbing zone. Yet their bass isn’t bloated; in fact it’s among the fastest-sounding and cleanest bass I’ve used. Particularly since other headphones that tight also tended to be anemic in the low end.

After my “holy cow I love these headphones” reaction, I knew I had to compare them directly to my Denons. (Which I talk about in a video here.)

Also note: I am using the DT 1990 with the Dekoni Elite Hybrid pads, so all observations about the sound at this point should be taken through that lens. For instance, these pads smooth out some of the semi-harsh highs of the DT 1990s.

What I sat down to talk about here, without re-hashing points, is that subtle degree of refinement that undeniably stands between them.

Superficially they are very similar: the both have strong bass, detailed mids, and crisp, bright highs.

But I find the DT 1990s to bring just a little extra to each of those areas. It’s that extra fiber, that can’t-put-your-finger-on-it presence in vocals and the instrumentation that ends up making for a pretty different experience.

After giving it some thought, it occurred to me to explain that point like this. The Denons put on a good presentation, and it sounds like a well-reproduced recording. The Beyerdynamic DT 1990s sound more lifelike, as if the music is being played live in the room, just for you.

I’ve had a stronger emotional experience listening to music with the DT 1990.

While both of these headphones occupy a similar price point (when the Denon AH-D5000 were new), doing some A/B comparisons with them really shows the development in audio technology over the years between them.

For those wondering if Beyerdynamic’s “Tesla drivers” were mostly marketing fluff or if there really was something to that, there is a nimbleness to the sound that can’t be denied.

The Denons also have a mild sibilance in the highs, so while both of these headphones are bright-sounding, the Denons suffer more for it, I think. The sibilance occasionally makes the highs sound lower fidelity on the AH-D5000s, whereas the DT 1990s maintain a greater sense of control here.

Years ago I was blown away by how deep the bass went on the Denon AH-D5000. Compared to all other headphones I’d tried, the D5000s went subwoofer deep, which was great for electronic and rap music, as well as movies and games.

I went into this comparison figuring that would be the one way the the Denons would excel. The DT 1990s also go deep, but probably not as deep as the Denons. Especially since people in audio forums often comment about how headphones using biocellulose drivers (like the Denons) tend to have more bass slam.

However, even a quick listen of The Weeknd’s “Dawn FM” album with both headphones revealed that not only did the DT 1990 go slightly deeper into the sub range, it did so with more control.

So at this point I guess I’d listen to the Denon AH-D5000 out of nostalgia since I’ve had them so long, but they just don’t bring anything audibly to the table that makes them better than the DT 1990s apart from that.

The sense of nostalgia I obviously have for the Denons is clear to me after this, particularly because of the sense of disappointment I felt that even in the bass area the DT 1990s are stronger. Why should I be sad about that since I own the DT 1990 also?

I’m losing nothing by one being better than the other.

Perhaps it’s because it feels like a mark of an era being over, that headphones I’d once considered the best I’d ever heard failing to beat out a newer pair at basically anything.

That’s not of course to say they’re bad headphones or they don’t sound good. If I’d never heard the DT 1990s I’d probably still think the Denons were amazing. But after doing another recent direct comparison between the two, the sophistication of the DT 1990’s sound is beautiful and undeniable.