Can the Civivi Baby Banter Hack It As an EDC Knife? 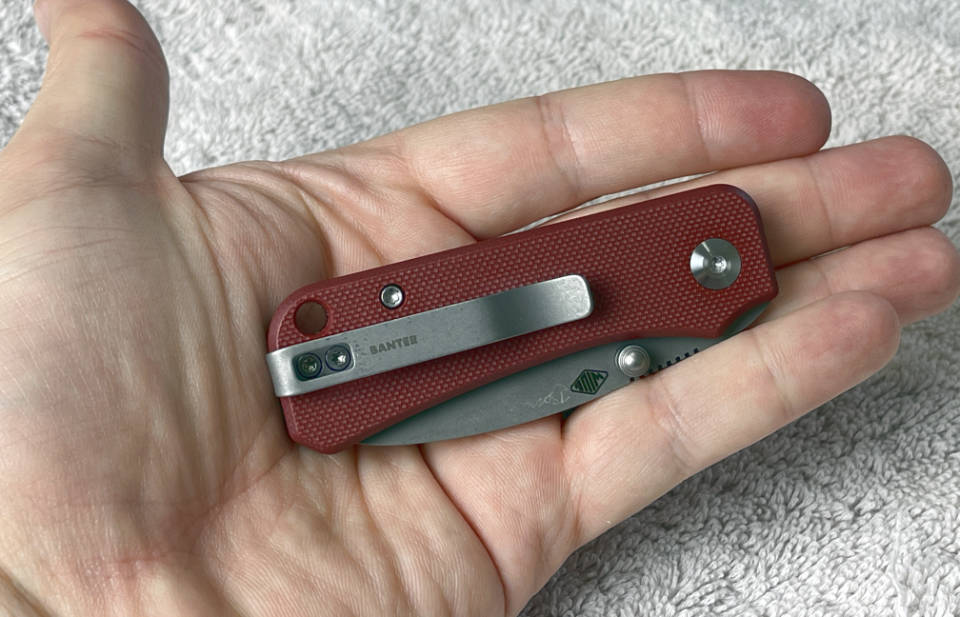 I love the idea of a minimalist EDC knife, with a blade size that’s legal basically everywhere and disappears into the pocket from negligible weight.

But sometimes the aim of being mini works against practicality, as was my experience with the Leatherman Squirt PS4. Would that be the case here?

Trying out the Baby Banter began with typical use cases that a lot of us probably reach for our pocket knives: cutting open boxes or plastic wrap of various kinds.

The Baby Banter was solid for all these tasks, and the heft of the small blade felt good in the hand.

Where it did seem to struggle a bit, however, was on thicker cutting tasks.

When I cut directly through folded up cardboard it definitely required more pushing than larger knives. Folded or twisted up plastic, bags and wrap, also required a bit of a sawing motion to cut through where a slice cut clearly wasn’t going to do it.

The bigger problem with the need for repeated slice cuts, or a saw motion, is that the small blade length can mean the object getting stuck in the choil or sliding off the front.

None of this is all that surprising for a small knife, but is worth noting particular because of how many people refer to this knife as a “little big knife”.

A lot of other reviewers have praised the Baby Banter for its ability to cut like a much larger knife. I have to disagree — it doesn’t cut terribly. But it just cuts like a small knife.

What they mean by that is the front choil allows for 4-finger grip you wouldn’t expect on a small design, making it carry more like a larger knife. That’s true, but I feel like that also might lead some to think this knife is more rugged for heavy tasks than it really is.

The lock seems tight and strong, so I don’t mean the knife feels like it’d break with harder use. Just that the small cutting edge definitely has some drawbacks for leverage.

Out of the box, the clip was overly tight for my liking. Any clip that squeezes the pants that tight against G10 will create wear spots, on top of being harder to draw or clip back into the pocket one-handed.

I removed the clip and used pliers to bend it slightly to loosen it, and the knife carried far better in the pocket.

Otherwise it’s a pretty good clip as far as I’m concerned. It doesn’t hurt my hand while gripping the knife, it has a subtle look that doesn’t draw too much attention, and it allows for deep carry.

Those are my main check boxes I look for in a knife.

I prefer the more hollowed out look of the larger Elementum’s clip, but that’s an aesthetic choice and less a functional one.

This was my first Nitro V steel knife. I appreciate its toughness and corrosion resistance, both of which are ideal for a pocket knife you carry regularly.

If this were a harder use knife I think the Nitro V would make more sense. But given my point in the previous section about frequently feeling like this small blade isn’t quite enough on bigger jobs, I can’t help but feel like the toughness of the steel is a bit wasted on this knife.

Folks in knife forums mention that Nitro V is a bit pricey, though, which may be part of why this knife is as expensive, if not more so, than the larger Civivi Elementum (in D2). The Elementum even features a steel liner on both sides.

And if so, you could argue it needlessly raises the cost of the knife.

On one hand, I love the small size and how easily the Baby Banter disappears into the pocket.

However, I find myself in need of a bit more cutting power just often enough that I don’t find personally that this knife makes sense for everyday carry. As a backup knife, sure.

I’m not a big fan of thumb studs for opening and would’ve preferred a thumb hole or flipper, and the Nitro V steel does seem perhaps a bit overkill for a knife that’s too small for heavy cutting.

Otherwise, I think it’s a cool design and great for someone looking for a small pocket knife that would be legal just about anywhere (in terms of blade length).