The Airpods Max via Cable With Apple Lossless 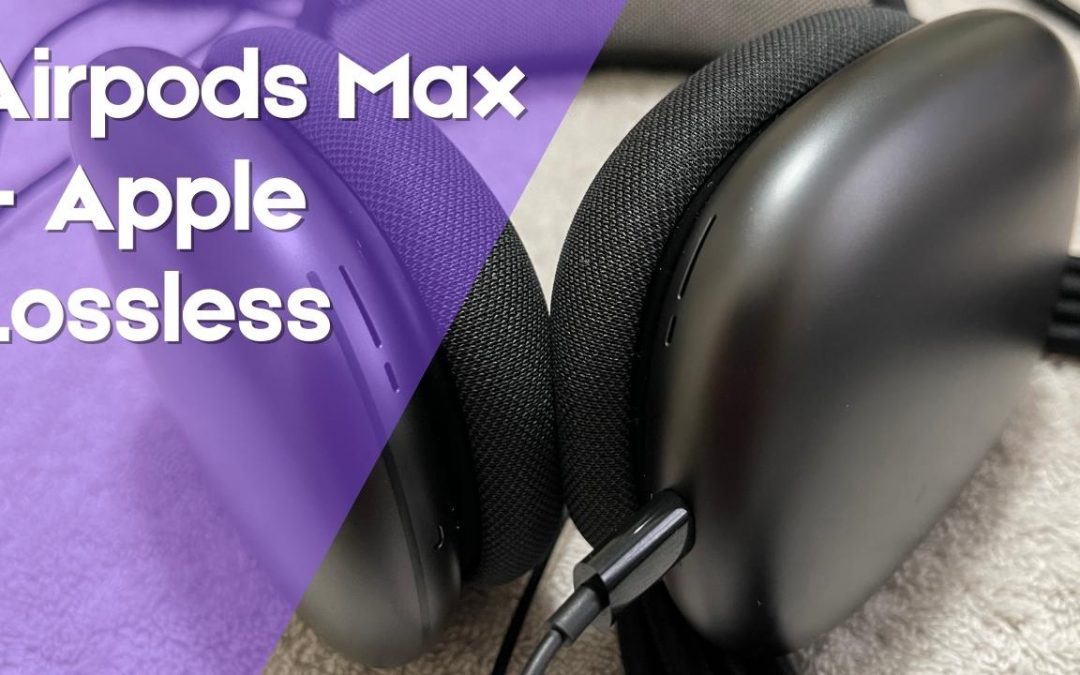 I had briefly used the Airpods Max via cable when I first got them — at that time using Amazon Music HD lossless.

I had appreciated that there was more to the sound via cable than via bluetooth, but most of my use for the Airpods Max at the time was wireless, so aside a brief test to comment about it in an initial review I moved on.

Since then, though, I’ve been asked about how they sound with Apple Music lossless via the cable several times.

At first I was tempted to reply, “Lossless is lossless, so it’ll likely sound the same on Apple Music lossless than it did on Amazon Music.”

I realize that’s not a very satisfying answer, especially since my initial time spent listening to the Airpods Max via cable was fairly minimal.

And so, my dear readers, I dug out the cable, fired up an Apple Music subscription, activated lossless, and connected them to my Sound BlasterX G6 DAC/headphone amp.

The G6 is capable of 24-bit audio in well over 192KHz, so I knew it could handle anything Apple Music would throw at it.

I’ll share my impressions of Airpods Max with lossless audio next, in order of what to me were the most noticeable characteristics down to the more subtle.

When I began a serious listening session the first thing that struck me using the Airpods Max via cable on lossless is the increased bass.

My feelings on the Airpods Max’s bass have often been that it’s decent, but seems to favor neutrality over fun more than I’d like. That was on bluetooth of course, where I’d been primarily listening to them.

Using the lightning to 3.5mm cable, I noticed subwoofer-deep bass on EDM or groups like AWOLNATION was significantly more powerful. And on well mastered albums like Wish You Were Here, kick drums had a meatier quality to them with more sense of impact.

It’s not quite the level of bass power my Denon AH-D5000 have, but it’s far closer than my general experience of the Airpods Max.

This gives the Airpods Max a warmer sound that I find very pleasing.

I’m not sure why there’s less bass on bluetooth since even though it’s a lossy format I’ve not noticed a big reduction in bass with lossy formats in the past, but perhaps there’s some inherent shortcoming of bluetooth audio that doesn’t carry bass frequencies as well.

The second most noticeable change, in my opinion, is how the presentation of the music seems wider and more around you than via bluetooth that is more of a left/right experience.

It’s not a huge difference, mind you, but it is something you can appreciate especially on a serious listening session.

Instrument separation was already something I appreciated about the Airpods Max in my initial review, but I find things like layered guitars easier to pick apart via cable and lossless.

The increased depth makes the music seem more realistic, like it’s a bunch of distinct instruments in different places playing rather than a wall of combined sound coming at you, if that makes sense.

I mention this part third because to me it’s the most subtle change.

Yes, as expected, instruments sound cleaner and have more substance to them than via bluetooth. Vocals have more of that realistic fiber to them, if that makes sense, and guitars sound more distinct. Cymbals and high hats have more of that crisp “Sssss” quality and less of the “Shhhh”.

That subtle echo or reverb some singers have in their voices as recorded is more audible this way and kind of disappears on bluetooth.

But while it’s an improvement you can hear, it’s also something I think you have to be listening for it to appreciate. If you were casually listening and doing other things, I don’t know if you’d really stop and say, “Wow, this sounds great!”

On a serious session where you’re listening and maybe writing a bit, like I did while preparing this review, sure — it sounds a bit better.

But if you’re expecting night and day, don’t.

If you already liked the sound of the Airpods Max on bluetooth, this will take them to a slightly higher level that you’ll enjoy.

But if you weren’t a fan of their sound, I don’t know that using a 3.5mm cable and lossless is going to create a big enough difference to save it for you. But these are wireless ANC headphones first, after all.

They’re built to be used occasionally and optionally via cable, but most of the time via bluetooth.

One Last Note About Dolby Atmos…

I’ll mention this since people talk about Dolby Atmos with this headphones a lot.

I did not use Dolby Atmos for this review. I know it’s an available option in the Apple Music settings, but I generally avoid anything Dolby.

If you’re wondering why, it’s simply this.

Over many years on several different systems, from A/V receivers to smartphone apps and high end sound card software, it always consistently made everything sound cheap to me.

Virtual surround and the like always created way too much midrange and way too little bass, turning my great-sounding home theater with a 15″ subwoofer into something that sounded more like desk speakers. Flip it off, and it’s a proper home theater again.

One time on my PC Windows did an update that reset my sound card settings, and I was wondering why my music suddenly sounded so warbly and flat. Then I saw Dolby was turned on. I turned it off, and suddenly everything sounded way better.

And I’m not an audio purist that believes in no EQ and no processing. I’ll take it if it sounds good and makes music more fun. But in the case of anything Dolby I’ve used, it just doesn’t.

And so, since I’ve often wondered what the fuss was about, I don’t use it. I appreciate that a lot of people get excited about it and like it and that’s fine if that’s you.

Thanks for reading, and I hope this was helpful if you’re wondering about the Airpods Max with lossless audio.