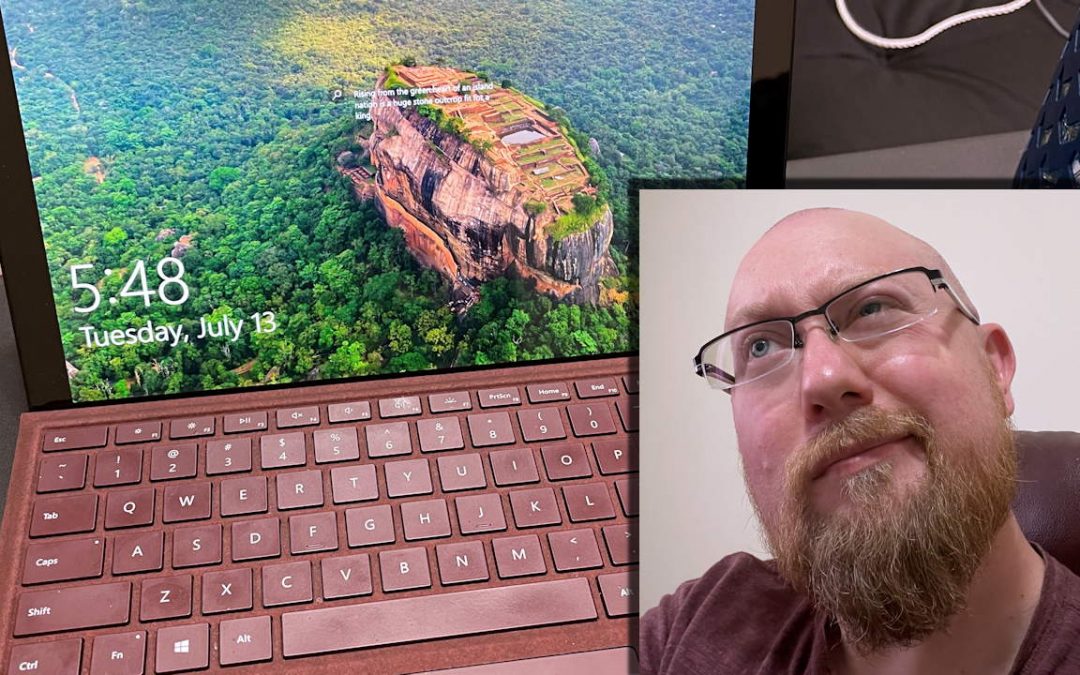 I’ve had the Surface Pro 7 for a little over a year, and for the most part I’ve been very happy with it as a tablet PC that I’ve used as my main computer (apart from occasionally using my PC for gaming).

But there are a couple nuisances I’ve observed very early into owning the Surface Pro 7 that continue being noticeable every time I use it. In other words, they are not things you just learn to live with and forget about.

I figured I’d post them here because they seem like things that if I were shopping for the Surface for the first time again I’d want someone to have shared with me.

First, the illogical charging port location on the Surface Pro…

The charging slot is on the lower right side of the Surface when it’s propped up in horizontal mode, like you’d use it with the TypePad.

It’s reversible, which is cool, but unfortunately in this case neither direction prevents the cable from bending/kinking.

It may not seem like a big deal, but repeated bending can wear out a cord. It’s the reason some cables advertise a large number of bends they will sustain to market their durability.

Facing down, there’s not enough room between the port and the desk or table you have the Surface on to stop the cable from having to bend 90 degrees. See below.

And when it’s faced up, the cable naturally wants to bend back down and follow gravity – creating the same bend in the cable as it flows down to the desk.

The one upside is that if you have anything plugged into the USB ports above the port you can lean the charging cable against it to hold it straighter.

If you’re a person that uses the same computer for 3-5+ years rather than 1-2, I’d imagine that would eventually cause some intermittent issues with the charger cable.

I’ve had these sorts of issues with cables in the past, and repeated bending on one spot was the cause.

Yes, there are third party Surface chargers that are far more affordable than Microsoft’s official version – my wife uses one and it works great. But it’s never ideal to be in a situation where you’re not sure if you can count on the charger lasting for the time you’ll use the computer.

I don’t understand why Microsoft doesn’t reverse the position of the USB ports and power slot.

The tablet PC could function just fine with the USB ports at the bottom right rather than the top.

But the charging slot being at the top? That would allow the cable to face down and hang very straight and relaxed down the side of the tablet.

As far as I can see it, that’d be all benefit and no cost, and it’s weird that after 7 generations of this tablet PC they’ve not switched that up.

The Surface Pro follows the typical setup smartphones use for the cameras, namely that the more powerful camera sits on the back and a weaker one is used on the front for selfies.

This makes sense on a phone give the way people hold them to take serious photos, and you’d want the better camera in back.

But on a tablet meant to be used as a PC?

How often do you hold up your work tablet to take photos? For me, never. For anyone I’ve known personally that owns a Surface that I’ve asked? Basically never.

But ask any of those same people how often they use the front camera for Zoom calls and other functions? Frequently.

This feels backwards to me, and seems like a real example of where Microsoft didn’t spend enough time considering how people would actually use the device.

The 720p video quality the Surface Pro 7’s front camera is capable of is adequate for Zoom calls where video is being heavily compressed anyway. But if you wanted to record videos using the front camera to avoid the hassle of using a separate camera with tripod? Forget it.

720p in itself is ok, but the Surface Pro 7’s front camera captures grainy video that needs a lot of light to look even decent. I can’t help but wonder how much better it’d look with the guts of the rear camera placed on the front.

Otherwise, it seems like a shame to have this superior hardware sitting on the back of the tablet where it will rarely be used, and then be arbitrarily limited the rest of the time by what you have in front.

I hope these are things Microsoft will consider on subsequent revisions of the Surface Pro tablet.

I know it’s cheaper to keep reusing the same design standards between iterations, but the lack of innovation here between generations of the tablet is a disappointment to users. I can’t tell you how many articles I saw upon the Surface Pro 7’s release about how people were let down that the bezel width was equal to the previous Surface Pro 6, while iPad bezels have shrunk notably over the years.

Look, I’ve still enjoyed using the Surface Pro 7 for the most part over the last year. It’s not perfect and nothing is, but when it’s time to shop for my next tablet computer, I can’t say with certainty that another Surface Pro is a given for me.

Design considerations like these would certainly help tip the scales in its favor, especially when other tablets seem to be paying a lot more attention to plug locations etc.